Friday was my day off so I headed down to Red Deer for the Gold Dressage show where Shimmer-E was showing her lovely 4-year-old RPSI stallion in their first Gold show.

Her weekend started off with a bumpy start, her Thursday hack was tense, distracted and Ritchie threw in a buck. Friday morning she was feeling nervous and discouraged and like she may have over-faced her horse.  After another tense warm up she elected to dismount because she was not feeling confident or safe.  After a quick discussion with the steward it was decided that I could in fact warm him up.  So I grabbed my boots and breeches out of the car, borrowed her helmet and mounted up. Studly Pants was a little behind my leg, and a lot tense but I said "go forward, and go forward NOW" and since Shimmer-E has installed all the right buttons he responded with "Yes, Ma'am".  We went on to have a solid warm up.  He was no where near as relaxed as he can be, nor as forward but he was willing and obedient.  For a baby stallion at his first really big atmosphere I think we can call that a win.  They went in to take a 67.7% in First Level-1, good enough for a first!

Saturday I got up early to go and ride Ritchie again since Shimmer-E was teaching a first-aid course.  He schooled just lovely and then I settled him in for the day and booked it home.  I loaded up my mare, went and grabbed a couple of friends and their horses and made the trek to Minds Eye Ranch for our first cross-country school of the year.  It deserves a post of it's own, so stay tuned!

Sunday I headed back to Red Deer to help out Shimmer-E again.  I got him braided and all groomed up (she had let him roll in the arena-this is me publicly shaming her for not bathing him after!) and hoped on to warm him up again.  He warmed up fabulously!!!!  I couldn't have asked for anything better.  There was a small jump set up (read 12", maybe) and he even got his first experience going over a fence with a rider.  Once those massive joints of his fuse I'm totally stealing him and he's going to make a fabulous jumper.

Amanda got on and was having a great warm up until a gelding walked by in a scrim sheet.  The sheet for some reason caused a baby meltdown.  They had to go in and ride their test and Shimmer-E kept it together and rode the very distracted and tense horse that showed up and managed to pull off a ride that was good enough for 3rd.  We just couldn't get his brain back so after a few 'discussions' about acceptable behaviour we ended on a decent note and put him back in his stall to hopefully let him settle.

We pulled him out for his last test of the day and he was back to being a very good boy.  A few bobbles left them slightly behind their first First Level score but it was still good enough to win the class.  It was a really good place to end his show weekend (after a brief photo shoot with his handsome ribbons). 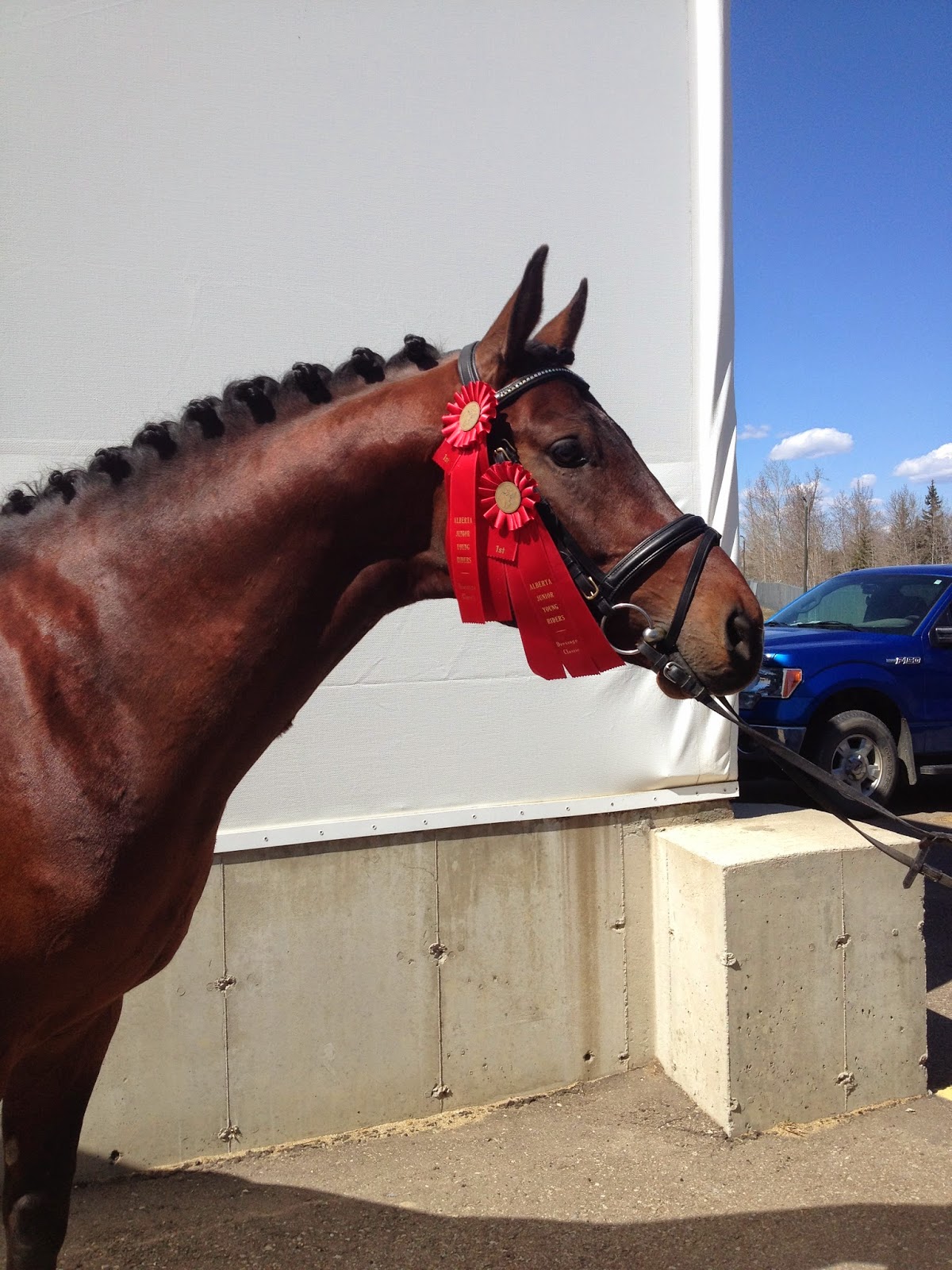 Thanks to Natural Expressions Photography for this lovely photo of a most handsome boy. Posted by LoveLaughRide at 15:08