Sunday was the first cross country show of the year.  Isabel was awesome enough to come out and pick me and the mare up and we were off!  I had entered Entry, knowing we could have some issues but height isn't really our problem, steering and confidence are. So for better or worse we were giving 2'6" cross country  go.

Our course was 7 stadium fences and 7 cross country for a total of 1805m and an optimum time of 5:09.  The cross country fences were very straight forward with the most difficult being an up bank, 2 strides to a down bank.  The up wasn't flagged so there was the option to go up the ramp and jump down the bank.  (This becomes important later)

As we were tacking up, the skies unleashed a torrential downpour.  Rivers of water running of my saddle kind of downpour.  Turns out the mare hates rain.  She was fidgety, obnoxious and downright rude about me mounting up.  I was really glad I had corks since our stadium portion was on grass and then we went straight out into cross country.

Thankfully the rain was short lived.  By the time I made it to the warm up area the rain had mostly petered out.  The mare warmed up beautifully, even jumping the verticals at steep angles (inviting a run-out) without missing a beat.

When we went into start our twisty-turny stadium I was feeling nervous but very determined.  Our first fence was an oxer and I was not going to start our day with a run-out.  I rode her aggressively to the fence and she took it like a pro.  The rest of the course was not pretty as she felt very sticky and had a few deer moments but we went clear and were headed out to the cross country.  We had a nice gallop to the first fence and a few strides out I felt her back off.  I grabbed my reins in one hand and used my whip.  Unfortunately it didn't help :( She went left, and I went right.  The fall was minor and I could have landed on my feet if I had tried but since I have no desire to repeat my ankle destruction I tucked my knees in and landed on my hip.  The reins had come over her head and I've never been quite so glad I let her graze with the lead rope dragging.  She'd step on them, stop, back up and continue on.  I caught up and started my walk of shame. 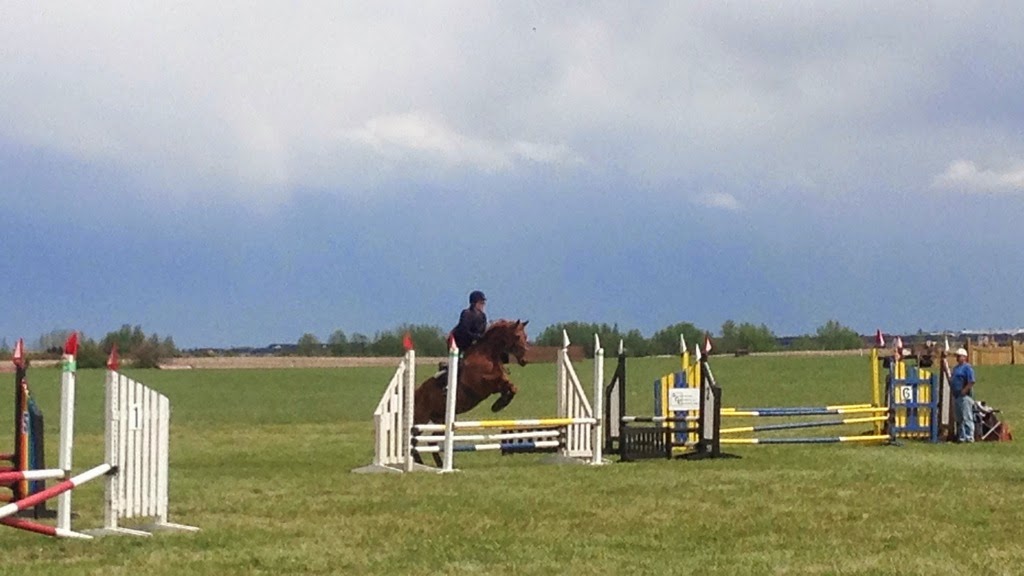 Fortunately we had a second round to redeem ourselves.  The stadium felt great, until we got to fence 7 ad had a run-out.  Truthfully, I'm not sure why we had the run-out but it sure galvanized me into riding her like she was going to die if she went left.  We got over the first cross country fence, it wasn't pretty but I stayed on and we went.  The next fence rode lovely and we were off to the banks.  20 feet from the banks she slammed on the banks and reared.  These are the same banks we schooled a week ago without an issue.  Rather than pick the fight with her I chose to do the ramp and jump down.  We had another attempted run-out at the next fence which resulted in a stop.  I backed her up a few steps and we jumped it no problem on the second try.  Next was a big log pile that caused her to back off but I got aggressive and growled and we sailed on over. Our next fence was a small A-frame right before the water and I just plain ran out of steam.  When she balked I had no legs to back up my desire to go forward so we picked up a stop on the smallest fence out there.  We backed up again and jumped it with one trot stride.  She went through the water like a champ though!  The last fence was also the biggest, and one we hadn't jumped before so I was a little nervous and just rode with all I had left.  She didn't even look at it.  It was the nicest jump of the day and was a good place to call it a day.

While it was not the day I wanted it still had moments that stand out (like our course had 4 oxers and not one was an issue!).  I have to say it is very disheartening to continue to have the same issue and at tiny little fences.  I'm feeling discouraged and at the end of my rope.  I can't keep falling off because I will eventually get seriously injured and I just can't afford that.  I promised myself and the mare that I would give it a solid year for us to get our shit together but there are people (best friend and coach included) that think it is time to find her a new home.  I'm not there yet, and I don't want easy (safe is a whole different story).  I'm not going to learn anything if I continue to ride the easy horses.  So I'm going to pick myself up and head to the Alhambra derby this weekend for another go at this cross country thing.

Posted by LoveLaughRide at 15:23