Going Training this year has been amazing, but knowing that I have a senior horse it became extra critical to prep correctly. I spent most of the year focused on fitness. We hacked out a ton, but always with a plan. Canter sets, trot sets, long trots, hill work, rinse and repeat. When we weren't focusing on fitness we were working to sharpen up our dressage and SJ. We worked, and we worked hard.

After a super shitty Sunday morning I made the last minute decision to haul over to the local grazing reserve and go for a ride.

I had the absolute best ride! I had zero plan, zero ambition and Dee and I basically just went for a toodle. 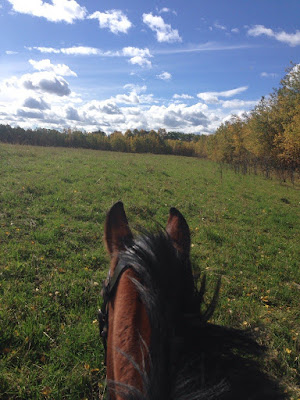 There is something so good for the soul about hacking out on the buckle, surrounded by the amazing fall colours and just enjoying every step.

I'm going to try an remember to throw the plan out the window every once in a while. I'm positive we will be better for it.

And Then There Were Four...

3 posts in 3 days after nearly a month of silence? Apparently my motivation is returning (also, I hadn't planned to post yesterday but FB reminded me it was Dee's anniversary and that will always require a post)

So if you follow me on Instagram (which can only happen if you aren't basically a cave troll) you will have seen that yesterday brought a new arrival to our little acreage. Apparently September 13 is a good day to buy horses.

When we discovered that Dee was NQR I was chatting with a really good friend and had the passing thought that I should picking up a project, in case Dee didn't return to her previous level of competition. Said friend is a serious enabler and had tagged me in a photo on FB a few days later of a horse out in Manitoba (about 13 hours from my place). 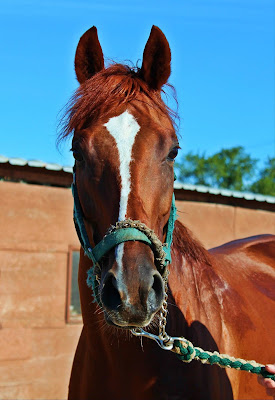 Well that face required some investigation. After a conversation with his trainer (who is also is owner and breeder) I was pretty confident I wanted him. Some more photos and one race later I got a call that said he was mine if I wanted him. Apparently she had more interest in him but wanted to offer him to me first as she thought "it's be a good home to start his new life". The catch was he had one more race to run in two weeks (which was Saturday). So began the wait. If you know me you know patience is not well represented in my wheel house. 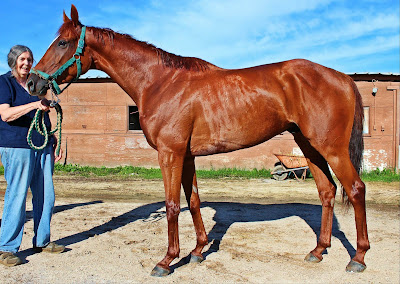 Well after a ton of last minute juggling (first we were driving out to get him, then shipping, then driving out and finally shipping) he was on a trailer to Calgary. My mom picked him up from the shipper as it was the first day of classes and I really needed to make it to class. She over-nighted him for me and then we met midway yesterday afternoon.

I've never purchased a horse sight-unseen before and was on pins and needles waiting to meet him for the first time! He's just as adorable in person as his photos suggested. He has the most floofy ears ever!

He's 4 (but he's only had one birthday because he was born on February 29), approximately 16 HH, raced 15 times, never placing above second with career earnings of ~$5000. His JC name is He's The Fashion and his barn name was/will remain William.

He just needs a show name so I can get him a TIP's number. And to eat all the foods because he is very slim (he currently fits Dee's 75" blankets, but only after I shorten all the straps).

I can't wait to get to know him and see where his new life leads. And now I've got my very own $900 Facebook pony!

Two years ago I stole a horse.


Ok, I did pay for her, but I paid so little I might as well have stolen her. Seriously, who sells a rock solid Pre-Training (Novice) packer with plenty of Training miles for less than I paid for my used Amerigo?

Two years ago trying to jump an oxer would almost certainly send my anxiety through the roof. I was having panic attacks almost every time I jumped (even if the jumps were under 2'6").


I was casually looking for a new partner. I had a pretty short wish list:

Dee checked all the boxes, and some of the ones I didn't even think about (Next time I will make it no greys and no pintos though. I'm so sick of purple shampoo).


Slowly but surely my little, overlooked, rockstar has helped me find my confidence again. We recently went XC schooling and we did the Prelim water line like it was no big deal!

Oxers (and triple bars) no longer have me quaking in my boots. I know we can successfully jump around a 1.0-1.10m stadium course. Dressage is still a major challenge but I have faith that we can get around any course thrown at us.

I can't find the right words to explain what this horse means to me. All I can really do is leave this reminder: Life is too short to ride a horse you aren't enjoying. Find the one that matches you and the world opens up in ways you wouldn't believe.

In lieu of an actual post, here's some of my favourite photos from the last month.


I've totally lost my motivation to write meaningful posts. I've got a couple recaps I've started but all in all I just can't seem to get it together. How do you (especially the daily posters) keep yourself motivated to blog?

Posted by LoveLaughRide at 13:43 9 comments: