Where The Red Mare and I Part Ways, In More Than One Way

So my last post about the mare saw me falling off when she reared and went down.  After that the mare and I hauled down to Alborak to clinic with Sandra Donnelly.  I hoped that all would go well but I also really hoped that the mare would show her obstinate side so that I could get some help.

Well horses being horses, the mare was a complete rockstar.  The only run-out we had was more pilot error than anything.  On the morning of the second day I also showed the mare in an Extreme Cowboy event, mostly because my mom was doing it and the mare's done it before so why not.  She warmed up well and we were the first ride of the day.  When I went in and asked her to pick up a canter she started bucking.  And I mean bucking, not just hopping around.  My rein snapped and I bailed off.  Turns out, in Extreme Cowboy, you have 60 seconds to catch and remount if you want to continue.  I got back on the mare and managed to complete the course without an issue.  I've never seen her buck before or since so I'm not sure what happened but I quickly loaded up and was off to have a great second day to my clinic.

The mare got a mini vacation at my moms horse before we did the Cochrane HT.  We had a great weekend.  We had two XC refusals but we jumped the ditch and finished on a number!  Things were really looking up.

The next weekend was the Sidesaddle Clinic at the BarU (which is a whole post on it's own).  The mare was a delight the whole weekend, even jumping aside!

And then there was Thompson Country HT.  What a weekend.  I thought dressage on Friday went pretty well but I felt I was tense and our corners definitely lacked polish.  Turns out the judge disagreed.  We were sitting in 1st out of a very competitive division of 30+!!!!
On Saturday we were having a good warm up for XC but it was excessively hot and they were running behind so we just chilled out for a bit.  When we were only a few riders out my coach had me school the vertical and then come to the oxer.  The vertical rode perfectly but the mare stalled out in front of the oxer and then tried to pop over it but just crashed through it.  I popped off, mostly landing on my feet.  After getting cleared by the paramedic I got back on, schooled the vertical a few times and re-approached the oxer.  The mare slid to a stop and spun out left (witness' said it was a very dirty stop) and, you guessed it, I came off again. I landed on my feet again though.  So the ground jury eliminated me after getting cleared by the paramedic.  I didn't even know you could be eliminated in warmup :(


To say I was disappointing would be an understatement.  I had reached the end of my rope.  Between the rearing, the bucking and the stopping I was getting scared and discouraged.  I'm a good rider but I also have a physical limitation with my weak ankle that also compromises my balance.  After the rearing incident I had contacted a trainer friend of mine to inquire about putting some training on the mare.  We had decided that she would head down in August since the trainer would be gone for 10 days to go to Rebecca Farm.  She was at the event and offered to take the mare a few weeks early as she had room on her trailer.  So I loaded the mare into her trailer and wished her luck.

So I have become quite apathetic about blogging due to continued issues with the red mare.  At some point I will update on her but today I'd rather focus on the happy.  So without further ado I introduce to you Le Premieur SE (Sullivan), a 2014 RPSI colt out of La Bamba SE (Ritchie)
Sullivan is one of the first foals from Shimmer-E's lovely 4 year old stallion out of an Arab mare.  I'm very excited to announce he's all mine!  I was there shortly after his birth and signed the papers then and there. 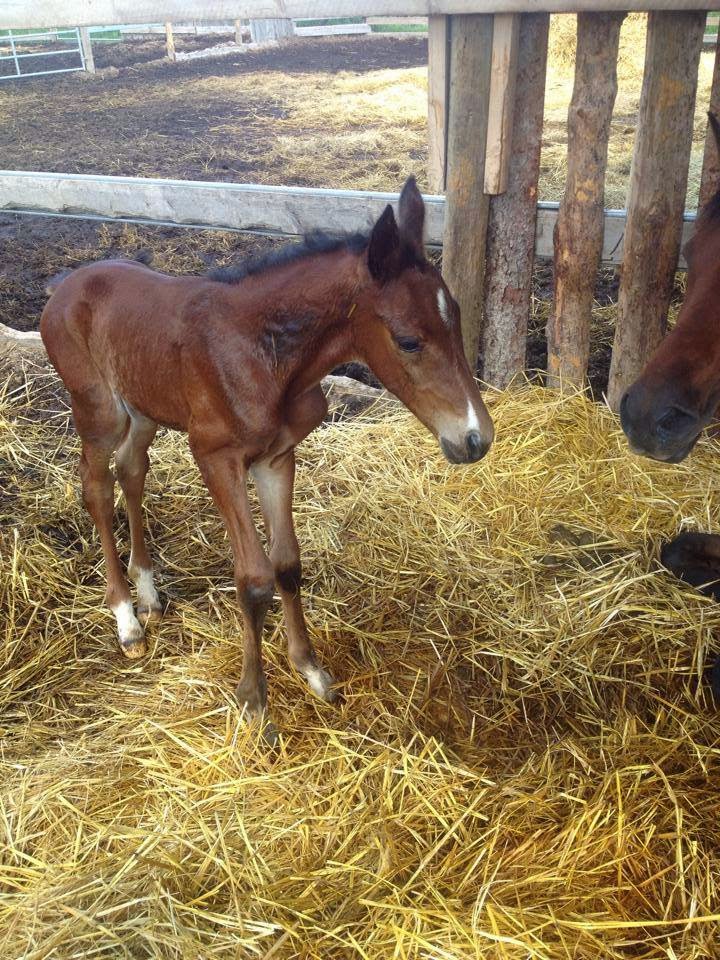 He's going to the RPSI inspection on Sept 10th and there he will be fully branded.  He will also be dual registered half Arab.  I'm not sure I have any interest in showing on the Arab circuit but you can win blankets of roses so I'm not ruling it out yet!

My hopes are that he will prove to have the same attitude and work ethic of his sire.  The talent would be awesome as well!  For now he's just going to have to get used to being loved (read: pestered).

Posted by LoveLaughRide at 15:05 2 comments: