The Best Weekend All Year

I apologize if the formatting is wonky on this post, but I'm writing it from my phone while sitting in Kentucky!


We flew out on the red-eye and got in early afternoon. Between the 3 of us we figure we've had about 5ish hours of sleep so there have been some sleep deprived shenanigans. I may have impulsively bought 3 different peach flavoured adult beverages, 2lbs of peanut M&M's and a grey chevron shower curtain, but no real food for dinner. Oops :)

I'm super pumped for this week and I'm hoping to see all the Rolex bound bloggers on Thursday for Taco Night. I'm not sure if I'm more interested in meeting some awesome people or trying to figure out what's with all the hype about tacos (blasphemous, I know).

Posted by LoveLaughRide at 18:12 8 comments:

My original plan was to send Sullivan to the same trainer who started his sire. I really liked what Roland did for Ritchie and was hopeful for a repeat on my little guy.

Unfortunately Roland is booked almost 16 months in advance. So back in summer of 2015 I booked my then yearling in for 30 days in February of 2017 and 30 days in January of 2018. The plan was to put an initial 30 days on him as a late 2 year old and then another as a late 3 year old with minimal work in the meantime.

And then my yearling grew very very slowly. His joints as still huge and open and he's physically immature. And small. He finally hit 15HH in January (for the record his sire is 16.2, his dam is 15.2 but throws big babies, the last 1/2 warmblood is 17HH). And mentally he's taking his sweet time maturing as well.

So I decided that sending him for 30 days at this point was not the best value. He's at a point where he can really only handle 15 minutes of work/pressure every few days. So if I sent him he'd likely only end up with 4-5 hours of work over the month.

My mom used to train horses for a living and I've started a few on my own (under her supervision) so we decided that since Sullivan was going to be spending the winter with my mom anyways we would start him ourselves over the winter. This gave us the opportunity to do it very slowly in order to keep with his current abilities.

Since neither one of us was interested in putting the first few rides on my mom called in a favour and got one of her clients, a professional cutting trainer, to put the first few rides on, just to be safe. Sullivan was a star for it all. He bucked when he was first saddled and then hasn't even considered it since.

He's now had 10 rides, spread over the course of 4 months. He's willing, curious and brave. I couldn't ask for a better baby horse. I haven't had a chance to see him go in person yet but the videos make me super excited about his future.


Ride 8, and look at how balanced his canter is


He' going to stay with my mom for the summer and then come home in the fall. He's so happy there and it's very good for him as he has a 40 acre field, on the side of a hill, and a herd of 15 to terrorize. My place is only 4 acres so having one less to graze makes pasture management easier.

I can't wait until I finally get to sit on him. It's a dream that's been in the making for over 5 years.

Posted by LoveLaughRide at 11:43 7 comments:

11 Weeks In One Photo Dump

Break out the champagne! I wrote my last final for my degree last night. This semester has kicked my ass, hard, so blogging (and horses) took a back seat. I've been riding, but sporadically. Thankfully my creatures are all honest souls so there has been very little antics. And they live in the backyard so I still get my pony-fix.

This is exactly how I felt last night

My previous barn once again hosted two Sandra Donnelly clinics. I rode both horses in the first one. I was super impressed with William he hadn't done a grid or a course prior to this clinic but he took both in stride.  He also had never seen an oxer before this clinic and he just couldn't brain. Even when we disassembled it it took him quite a while to figure out that he had to jump/walk over both rails. The clinic was a great success though. Sandra told me I'd be crazy to sell him, but if I did decide to sell him I should sell him to her. It's always great when someone you truly respect thinks highly of your horse, even when he's being a sassy, green 5 year-old.

Dee was her usual rockstar self and packed me around the 3'3" group. I missed her and I"m so glad she's back to her usual self. I've seen no back soreness at all since we started back jumping. 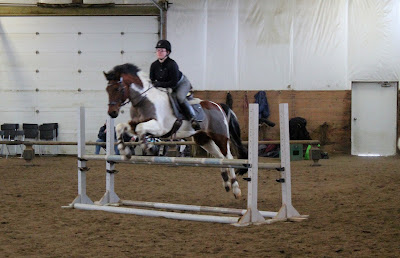 It's been pretty low-key around here and I'm quite excited to get back into a regular schedule, with both the horses and the blog.

Posted by LoveLaughRide at 11:26 6 comments: