The red mare remains for sale and unfortunately the market here is just flooded with good horses and very few buyers :(  She's going to stay with the trainer for one more month and if she hasn't sold by the end of September I will bring her home.

This is because my board bills are now doubled and I need to reduce costs where I can.  My board has doubled because I have a new partner-in-crime (ok, she's more like my babysitter)!

I had no intentions of looking for a new horse until the red mare sold since I am not made of money.  I really needed her to sell to finance my new purchase.  Well the universe intervened and the perfect horse came up, at a price that I could swing.  Who am I to dispute the universe's wishes :)

My coach was mentioning I needed a new mount to some of her customers and they told her about this 15.2 mare that a girl was selling because the mare was not taking well to retirement.  Turns out Sandra Donnelly told my coach about this horse a couple of years ago, telling her she was a very cool horse and to snap her up.  Well because she is not a traditional event breed my coach didn't even consider her.  She knows I'm not overly concerned with bloodlines or age, all I wanted was a horse that jumped all the jumps so this time she passed along the info.

I drove a couple hours to try the mare out on a Saturday.  Turns out it was the first time she had been ridden in 2 months.  I had a really great ride and made plans to bring my coach back the next day.  Her owner suggested I bring my trailer so if it went well I could take her home for a trial (since I was not prepared to purchase something that I had not taken cross country schooling). 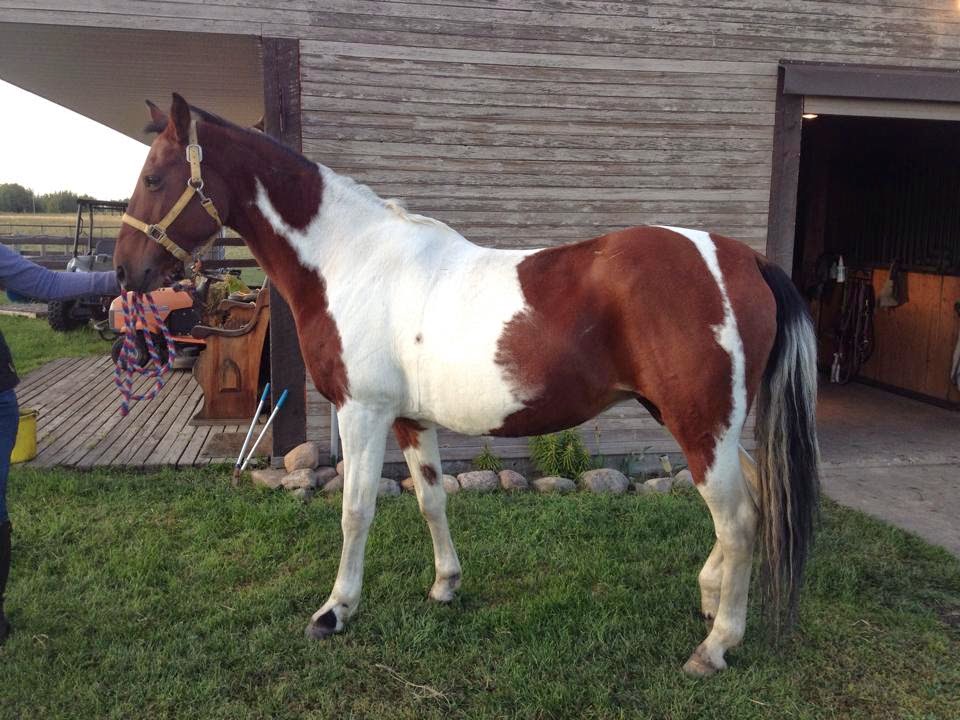 Well my coaches exact words were "Put her in the trailer".  So we took her for a week trial.  I took her XC schooling on the Wednesday and she was a complete rockstar!  She took me to every single fence.  Even the giant Pre-Training bench that I was completely terrified of.  While we were packing up to go, everyone told me I wasn't allowed to pass her up so I had a phone call to make.

So I'd like to introduce my new leading lady, Dee (affectionately known as Best Pony).  She's a 17yo, 15.2 Saddebred Pinto who has shown at Training and schooled Prelim.  Dressage is going to be a challenge but if I do my job and get her to the fence she will do hers and get us over it. She's exactly what I need to rebuild the confidence I've lost riding the red mare. 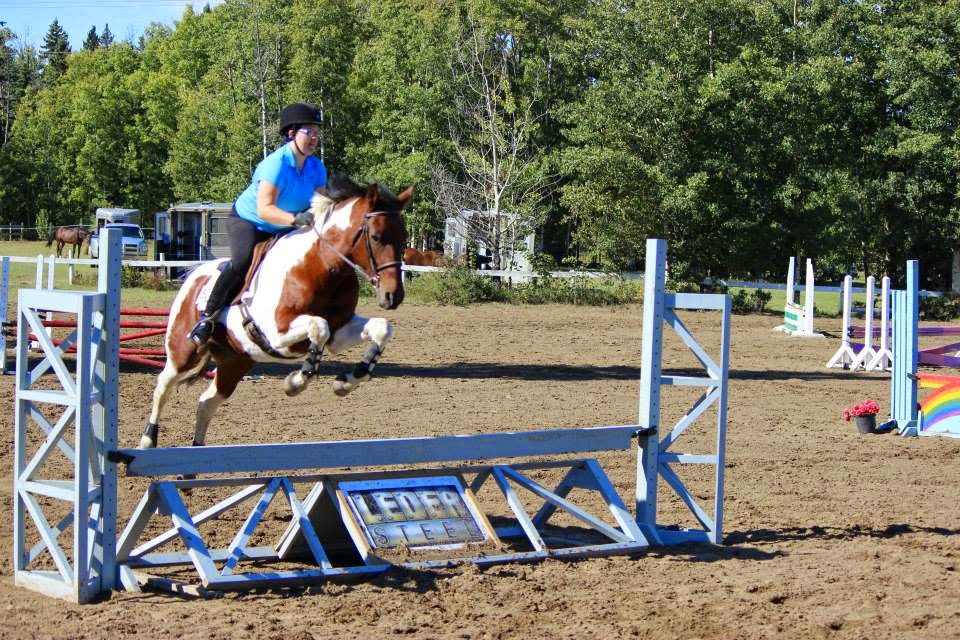 Posted by LoveLaughRide at 09:31 3 comments:

I've had a ton of things happen I need to catch up on.

Sullivan is officially inspected and registered RPSI.  We took him, Jasper, their mamas and Ritchie down to Okotoks for their inspection.  I  hauled the mare and foal pairs (I LOVE MY TRAILER!) and Shimmer-E followed in her rig with the stallion.

Considering the boys aren't halter broke and neither mare has been on a trailer in years it went surprisingly well.  Mares loaded like champs and we basically just lifted the boys in.  All 4 hauled and unloaded beautifully.

We got everyone settled in and ran into town to have dinner with my friend DM.  It was lovely to see her and the food was awesome.  The menu had 7(!!) pages of hamburgers.  Talk about hard to choose.

The weather forecast was calling for light snow but we weren't too concerned, in the first week of September it is very unusual for the temps to be low enough to be concerned about ice.  Well Mother Nature apparently likes to mix things up, just for shits and giggles.

We woke up to well over 8 inches of heavy, wet snow, no power and terrible roads.  Thankfully I had my winter riding boots and a scarf with me, but we definitely were not prepared for winter conditions.  The trip to the barn took twice as long as the evening before and once we got there we were slogging through over a foot of the white stuff.  Poor horses (who had overnighted in big beautiful paddocks) were wet and shivering.  There was also no power at the barn, which meant no heat or power doors.  Thankfully they had a small generator that powered the lights.


The inspection was a little smaller than planned, due to the poor road conditions, but went very well. Sullivan scored a Silver Premium!  I'm very happy with my little half Arab colt.  I think if he had been a little older (and warmer) he likely could have even scored better but he was still within striking distance of the top scoring colt.

The plan was to brand him but since he was so wet we had to microchip instead.  He can be branded next year if I want to take him back.  I'm not sure what I'll do.  I think I will re-assess when it's closer since it's a long way to go (5 hours).

I had to leave as soon as we were done because I couldn't take anymore time off work. Both colts jumped right in the trailer.  Here's hoping this is a life-long skill. I checked the road reports and it was looking like it was completely fine after the first 45 min.  Thankfully the plows had been out, so once I was off the back roads it was smooth sailing.  I made it home, to where there was no snow, in decent time and proceeded to go school XC in a T-Shirt.  Gotta love Alberta weather.

Posted by LoveLaughRide at 15:23 2 comments:

In August I finally managed to complete a lifelong goal.  I purchased my own trailer!!! It is the best thing I've done in a long time.  The freedom it gives me is amazing.  No more making sure someone else wants to go to the same show, no more worrying about borrowing a trailer in emergencies.

Don't get me wrong, I have awesome friends who have been extremely kind and generous lending me their trailers but it was past time to buy my own. I found one I really liked for a steal of a deal and I was off to the middle of nowhere Saskatchewan to go pick it up. 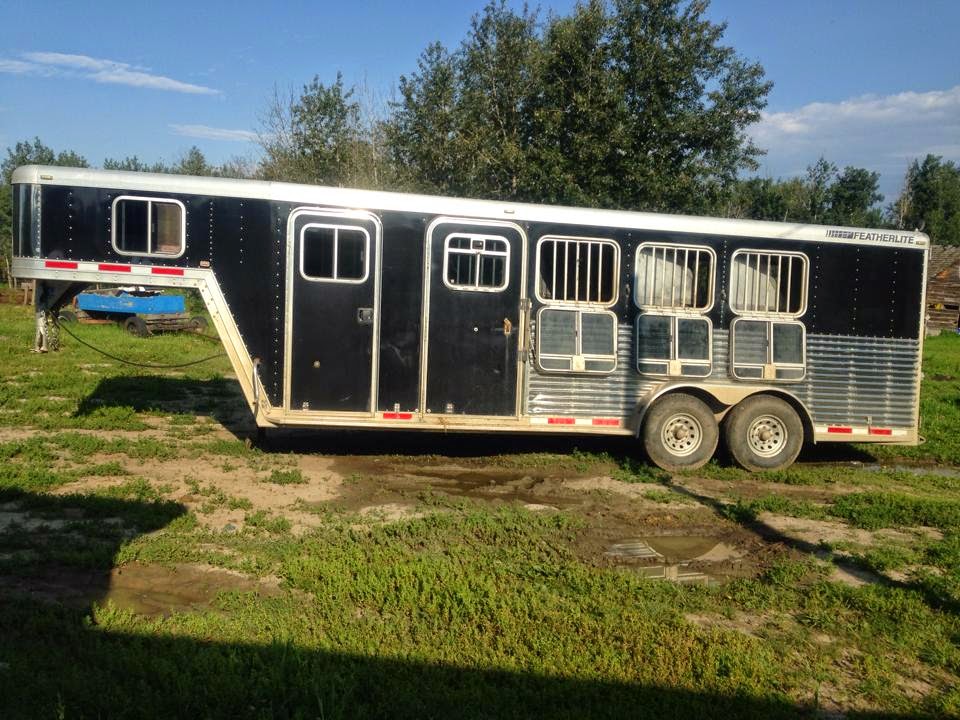 I bought a 2002 4H Featherlite.  It is exactly what I wanted, dressing room (where I put a mattress) has a stud wall, drop down windows and escape door.  I've slept in it a few times already and it is just so nice not to be sleeping in the back of the trailer.

Posted by LoveLaughRide at 08:08 2 comments:

For months now, almost everyone in my life has been after me to sell the mare.  I have felt that I wanted to keep at it.  I kept at it.  I sent her for training. I didn't want to quit, give up or fail.  A conversation with a casual acquaintance changed everything.

Selling the mare is not giving up.  It's not quitting.  And it sure doesn't make me a failure.  The conversation made me realize one very important truth: I'm too important to get hurt. At this point I don't feel safe jumping the mare, especially on XC.  Even when everything is going great I'm always nervous and slightly terrified.

That may sound narcissistic and egotistical but I truly believe that I need to put my safety first.  I've already suffered one major and life-changing injury due to a fall and another one is in the cards if I keep falling off. If I fall off on XC there is a greater possibility that I will get seriously injured or worse.

If I only wanted to do dressage and trail riding I would keep her in a heartbeat.  I love this horse.  I love riding her, but I want to event and for the two of us, this is not going to happen.

So we decided that I would not bring her home.  She is with the trainer to be sold.  It breaks my heart to sell her because I look at her sale ad and video and think, "I'd buy that horse."

I am confident this is the right decision for both of us but it's still hard and part of me hopes she sells fast so that I can move onto the next chapter.