Not So Wild Anymore

*No horses or humans were injured during the following events, despite many dark thoughts by both* 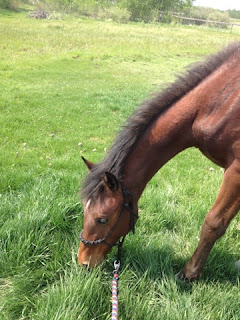 We've been working with Sullivan at least once a day for the past 6 weeks now. For the first 4 weeks I vacillated between "Oh god, he's awful and he'll need to find a new home" and "He's just a baby, a super smart baby with a mile-wide stubborn streak, he'll come around". And then at the beginning of week 5 he got his feet trimmed...

I love my farrier. Sullivan, despite having had all 4 feet picked up every day for well over a week, decided he wasn't having any of this farrier nonsense. He would pick up his foot and promptly jerk it back. When that didn't work well, he reared up, backed up, threw himself into the wall, whatever he could think of. He knocked my farrier on his ass and managed to catch me in the chest with one of his front legs during a time when he reared and tried to run me over. After that he got quite a thrashing. It seemed to give him the clarity required. After that he stood like a perfect gentleman for all 4 feet. He's also been super good for his feet since.


He then spent a few hours in a stall (for the first time) while Dee was hot shod. He handled the smoke and banging much better than I anticipated. The next day I borrowed a western saddle from my mom and he learned to pony, once again, it went much better than expected. I'm not sure if it was the clarity instilled by the farrier or just something clicking but he's been super since that day.


In the last two weeks he's learned about fly spray, blankets, baths, trot poles, going down the road, and trailer rides just for the sake of it. He's even jumped cross rails in hand! He's been super about all of it.  He may object at the very beginning of something new but it doesn't take him long to figure out what I want.

I feel confident in kicking him out to pasture now.  Sure he may be a little wild when he comes back in but the foundation is now there.

My horses are actually at the same facility for the first time! In the middle of April I moved both Dee and Sullivan to our summer barn. The plan is to have Sullivan there for 4-6 weeks so that he can grow up and learn some manners. After he's had some education he's going to get shipped out to a family members cattle farm. I want him to grow up in a big field and to just be a horse. He'll go out with half a dozen ranch horses and I have confidence that they'll keep him in line.

Up until this point Sullivan has lived at Shimmer-E's, where he was born. Unfortunately her place is over an hour from me, in the opposite direction of where Dee has been boarded. Between working full-time, part-time university classes, working out at least 3 days a week and one performance horse I hardly have time to see The Boy, never mind trek out to fight with an opinionated rather obnoxious weanling. I have complete faith in his care so I refused to add more stress to my life and instead decided to bring him home in the spring and deal with him then.

It sure has been an experience.  After a few go-rounds this winter, where Sullivan refused to be caught or lead we dubbed him #littleasshole. He ripped off a few (leather halters), threw himself on the ground rather than cooperate and was rather disagreeable.  It took us over 90 minutes to catch him and get him out of his pen when I went to pick him up.  I never would have guessed that getting him to walk out of his pen would be harder than getting him to load.

I bribed the neighbour kid to work with him. She's basically a savant with young horses. She's 12 and has already started more horses than most people ever own. So she works with my little monster and in exchange I will pay for, and haul her to the Beaumont event in June.

In the two weeks he's been home she's taught him to be caught (still a work in progress, but vastly improved), to stand tied, to lead and to pick up his front feet. While he still has moments where he gives you the death glare and says no, he has come a long way. He has an opinion on everything and doesn't hesitate to share it with you. Perhaps he has the soul of a chestnut mare ;)

I have a feeling that he will always be my #littleasshole no matter how big or well-behaved he gets.

Posted by LoveLaughRide at 16:21 4 comments:

And more of this, on varied terrain...

We've been going for daily walks that last between 60 and 90 minutes.  This gives me plenty of time for introspection. I've been thinking alot about how much anxiety I have because of jumping. Frankly, I'm terrified on a regular basis. I rode my friend's Training level packer in a lesson over fences that were 2'6" - 2'9" and I spent a good portion of the lesson just trying to breathe through the anxiety. I knew that no matter what happened Martini would take care of me and yet I still struggled.

Before the red mare and my accident I had no concept of this kind of fear. Now it is a daily struggle. I have a safe and honest horse. I'm a good rider with a solid seat. Yet, cantering down to a 2'6" oxer can paralyze me with fear.

But I keep coming back to it. Eventing has a hold of my heart and no amount of misplaced anxiety seems to be loosening it's grip. So I keep saddling up and keep giving it a solid effort.  Some days are highs and some are lows but every day is still a step in the right direction.

Today I came across this post and it resonated with me so strongly I immediately had to write this post.

Always one more time has been my philospohy, Alexandra Franzen just gave me the right words to describe it.

When I get disheartened I will remind myself. I will softly repeat it every time I feel like giving up. I will recount is loudly every time I canter up to a XC fence that unnerves me.

Posted by LoveLaughRide at 09:46 6 comments: