It's likely to come up many times so I figure some back story is necessary.

In January 2013 I was feeling frustrated with my horse and my mom had mirror feelings about hers.  So we decided to swap horses for a few months in hopes that a change of pace would help us both out.  So Riddick went to live at a barn near her (she lives 2.5 hrs away) and the mare and I got our first taste of each other.  I'd only had her for a few weeks but I was already pretty sure I was game for keeping her and selling Riddick, things were going so well.  We'd had a a couple of jumping lessons that went quite well, despite her being quite green over fences.

January 23 was a normal lesson day.  I didn't want to ride but I drug myself out to the barn.  Our flat work started out lovely and the first few jumps went well.  We presented to a plank vertical and my world came crashing down.  I didn't give the mare the ride she needed and she ducked out to the left.  I came off over her right shoulder.  I landed on the side of my right foot.  As I lay in the dirt my coach thought I should get up and walk it off.   I told her I was winded and was just going to take a moment to gather myself.  Then I looked down at my feet.  "Call an ambulance, call an ambulance now!" was the immediate reaction.  My foot was not facing the right way.  I could almost see the bottom of my foot.  After some quick discussion that , yes I have benefits that would cover the very expensive ambulance ride, 911 was called.  I'm not sure how long it took the paramedics to arrive but it really felt like forever.  The girls covered me in all the coolers and someone took care of my horse.

When the ambulance finally arrived they gave me laughing gas to splint my ankle.  They also put an IV in, which was difficult considering how cold and shaky I was.  Then with their help I stood on my good foot and got myself on the stretcher.  I told them there was no way they were lifting me if I could help it.  The trip in the ambulance involved me being incredibly high, and crying because they were going to have to cut my boots off.

In the ER I was put in a trauma room with my own private nurse.  It's all slightly blurry but they put my under conscious sedation to cut off my boot and align my ankle.  Apparently they also did X-Rays while I was under because when I came to they told me they couldn't see any breaks in the x-rays and that was highly unlikely. So off to get a CT scan I went.

Turns out they were right, I basically obliterated my talus and ruptured my calcaneofibular ligament.  Surgery was booked for the next morning.

Prognosis was 12 weeks non-weight bearing.  I spent the first 5 weeks on my couch, but I live in the country, by myself and could not drive.  I was going out of my mind with boredom so I went back to work way too early (doctor figured June).  One of the guys in the office picked me up and dropped me off and i worked from home a few days a week.

At my 6 week check up my doctor informed me that I was going to be non-weight bearing for longer than the 12 weeks as it appeared I had broken the blood supply and it was taking it's sweet time healing.  Since I had the flight and hotel and tickets already paid for (for the past 6 months) I went to my first Rolex on crutches.  I can't wait to go again when I can actually get around and walk the cross country course!

After 16 weeks I was finally allowed to start walking (and driving) with the aid of a cane.  This also marked the start of 8 months of intensive physio.

I still struggle with my ankle.  It has minimal flexion, almost zero inversion (which makes picking up my stirrup nearly impossible) and I struggle with pain if I ride long distances or intense courses. But I can walk, and I can ride, both of which I am extremely grateful for.  I'm also incredibly grateful that I live in Canada and the only things I paid for were my ambulance ride and walking boot (which my benefits through work covered) and physio after the first 7 appointments.  Because I had countless X-Rays, 2 CT scans, 1 lung scan, and inter hospital ambulance transfer, surgery (with 2 internal screws and one broken K-wire left behind), 3 days in the hospital and 4 orthopedic follow ups. 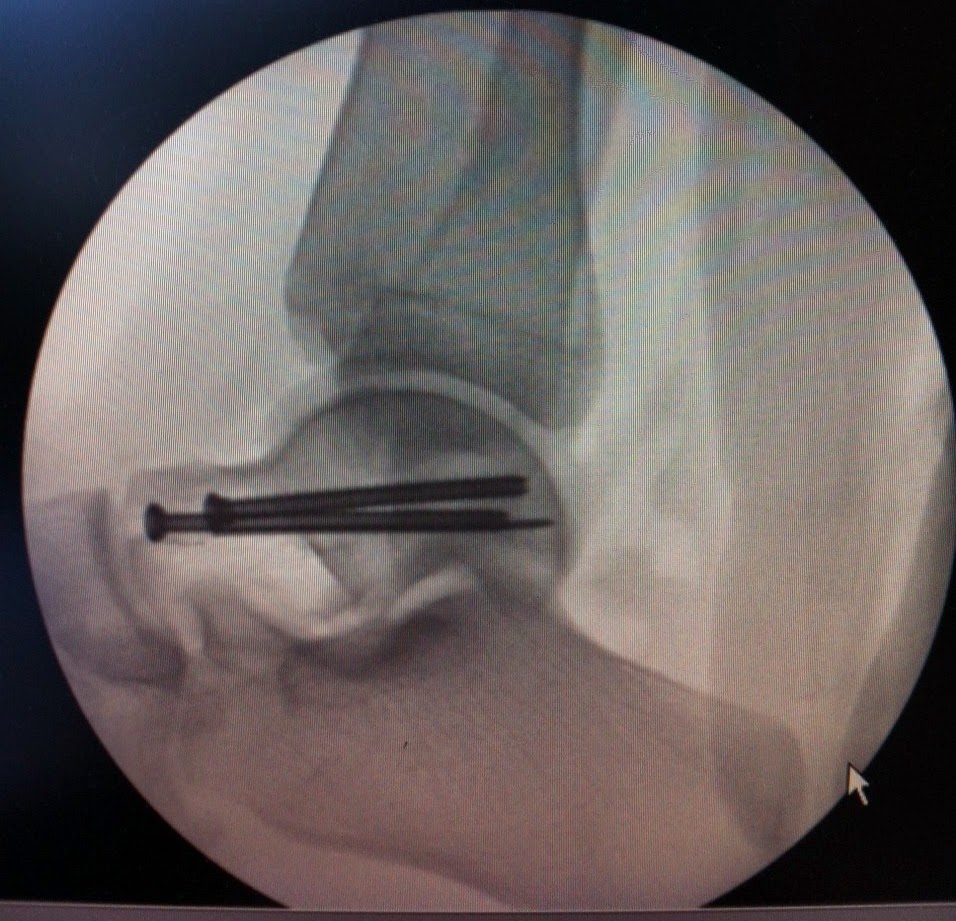 Posted by LoveLaughRide at 08:51