Alternate title: How to lose hours of your life on the Google-machine.

Since Emma started this pseudo blog hop I've spent way too much time really searching out William's family history. I know very little about TB bloodlines and I honestly bought him because his face was cute and I liked the look of him from pictures.


William was not a stellar racehorse. I'm pretty sure the only reason he raced for 3 years is because he came from a very small operation where his breeder/owner/trainer races as a hobby. He raced 15 times but only brought home $5,683. After feeding this horse for the past 2.5 months, I can tell you it cost them much more than that to keep him fed.

He was born and bred in Manitoba, Canada but he actually has an international pedigree. His sire Billy Allen is an Irish bred multiple graded stakes winner. Billy Allen successfully raced in 10 countries (interestingly enough he never raced in Ireland) before being sold to MB where he now stands at stud. His breeding fee in 2011 looks like it was $250, so not top-shelf, that's for sure. 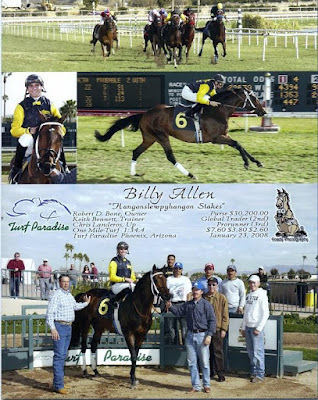 While racing talent does not seem to be one thing passed down to William, his head is a different matter. They share the same refined head and almost comically tiny nose.

Billy Allen is by Night Shift, a son of Northern Dancer. From the sounds of it, Night Shift failed to deliver as a race horse, racing 7 times but only winning once. He was imported to Ireland solely based on the Northern Dancer craze it seems. There are a handful of his offspring registered with USEF, mostly mediocre hunters with one eventer who's gone advanced (and another with no records but the owner listed as Bruce Davidson).


His dam, She's The Fashion, is an Illinois bred mare who raced for 9 years before retiring sound. Fingers crossed William got the genes responsible for that longevity.

His damsire is Gold Case who was undefeated in his only 3 starts before a severe case of founder ended his racing career. He's a handsome dude who has produced a handful of hunters (based on USEF records). What I did find during my time down the rabbit hole is that every one who talks about his offspring refers to them as level-headed, reliable and easy to handle. Those are all descriptors I have used for William. He's got a really good mind, and not much seems to phase him.
It's been kinda fun to figure out some of the history behind my favourite baby racehorse but I still don't think I really care. I'm more interested in the horse in front of me (keeping in mind I don't have any interest in breeding, which is a whole different kettle of fish).


Also, head on over and congratulate equinpilot on her 500th post! She's got a lovely giveaway to correspond with it.

Posted by LoveLaughRide at 10:14

Email ThisBlogThis!Share to TwitterShare to FacebookShare to Pinterest
Labels: William