At this point Chase belongs to my SO more than me. He works out of town and every single day he wants me to send him a picture of Chase. He rarely wants pictures of me or the dogs but he'll harass me if I forget to send one of Chase (he legitimately installed a better light on the front of the barn so I could take pictures after dark). 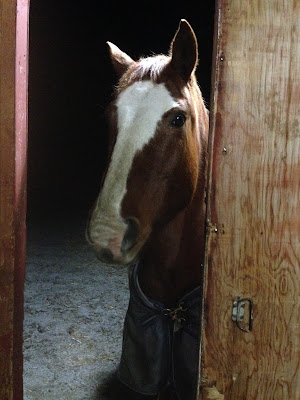 So it's been pretty rough for him this fall as Chase began to slow down and become more and more lame on that left front. We decided that it was time to take him back to the vet for more x-rays to evaluate where we're at.

Quick recap: Chase has ringbone and significant joint space narrowing in the left front. We've done a series of injections to facilitate the fusion of  P1&P2

With the alcohol injections he showed major improvement. In the week after his first one he cantered for the first time since I brought him home last fall. We did another in June and again in August. He was down to 1/2 a Previcox and was sassy and sound enough to take the Boy for trail rides.

The new X-rays show marked degradation and definite bone on bone. Basically it's trying to fuse really hard, but every time Chase moves he breaks apart part of the calcification that his body is trying to lay down. So what we've been attempting to facilitate  is actually happening. Unfortunately it's extremely painful (as anyone who has ever experienced bone-on-bone pain can attest to).

One treatment path my vet had used successfully in a similar case was bracing the lower limb to minimize movement. Basically a special shoe is built that allows for metal supports to be connected to it. Then the leg is strapped to the whole contraption. (I asked about a cast and he told me why it wouldn't work but I can't remember why for the life of me) Then 3-4 weeks of stall rest, doing the very best to keep them still.

The Boy and I debated our options for the rest of the day, but ultimately it came down to what he wanted to do. It is his horse and I've had some major financial challenges this fall so he is footing the bill. Ultimately we decided to forge forward with this experiment.

Thankfully my farrier is the best! He's actually a welder and teaches welding at a local college as a day job (he got burned out doing feet full-time) and he's super interested in anatomy and movement. I couldn't have asked for the more perfect person to build the apparatus.

Let me tell you though, trying to coordinate my vet and farrier simultaneously was like trying to herd cats on speed!

Chase also got 1 more alcohol injection into the joint (which was not an easy feat considering how little space actually exists in there). Then my farrier built one of the coolest/strangest things I've ever seen attached to a foot (in his words "I didn't miss a single day of farrier school, and they never covered this!").


It's a bit of a production to get him set up, but hey, it could be worse. First I wrap him from hoof to knee with a no-bow. Then the space in the shoe is packed with a tightly rolled polo (originally we were supposed to use a high density foam but after mashing the polo down to the consistency of a brick actually works better). Then another wrap from fetlock to knee. Next I wrap the entire brace to the leg, very, very tightly, paying close attention to the pastern piece. Finally vet wrap the whole thing to make sure it stays in place.

So for now Chase is currently living the pampered life in a box stall. Before this he'd never spent more than a day in a stall so I was concerned about keeping him chill (the vet even gave me a Rx for sedatives). Turns out it's a complete non issue. He seems super happy about it. He's getting tons of attention from the barn owner and her young kids, plus I'm out there every evening. He also got to avoid the deep freeze of the last 10 days.

He did end up with a small pressure sore almost right away but we've modified the back piece and it's now improving.

Fingers crossed that this works. I'm not quite ready to say goodbye to my favourite cookie monster. 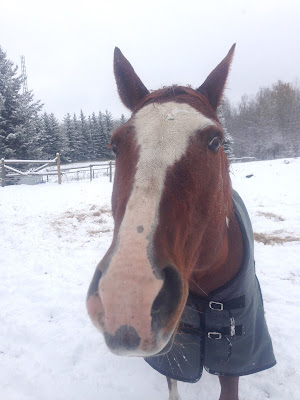 Posted by LoveLaughRide at 16:21