William is coming along really well. He's smart and is completely willing to try and figure out what I am asking for.

He's got contact figured out, his walk is fabulous, he's the trot pole master, his canter departs are beginning to come from lift rather than run, he bends reliably to the right (the left is still a struggle for more than a stride or two). He also leg yields both directions at the walk really well and is figuring it out at the trot. He does remarkably solid turns on the forehand. Shoulder in is coming along (he's much better on a circle, a straight line is still a bit dicey).


He hasn't put a foot out of place under saddle. He hasn't spooked, refused to try something or even gotten annoyed. I keep waiting for the other shoe to drop. I'm sure one day he's going to have a spectacular reaction to something completely unassuming.

I had originally planned to wait until the new year before I started him over fences but he's been such a good kid that I figured it wouldn't hurt to throw that plan out the window.

So on Sunday we set up a little cross pole and away we went.

He didn't even blink. he just trotted over it like it wasn't there, each time.


So we raised it up a bit. And he trotted over it, just picking his knees up higher.

We finally raised it a bit more (the center was maybe 2'3" on a tall day) and he jumped with his front legs, trotting with his back legs.

So we cantered. And he finally jumped! With absolutely no hesitation he just cantered through like he's been doing this his entire life. We came around and did it off the other lead and when he was foot-perfect again I called it quits and got off.

I know I gush about him every time I post but he's just so much fun. And is making this retraining process seem so easy (so far, I have no illusions that we won't hit a wall at some point).

Bonus? My dressage coach loves him and thinks he'll make a fabulous dressage pony if this jumping thing doesn't work out. 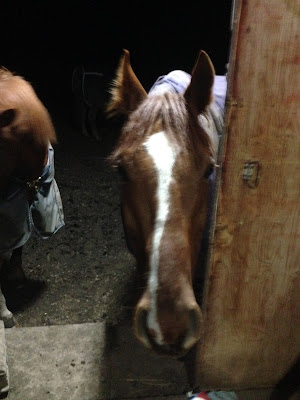 Posted by LoveLaughRide at 11:14