I Blame The Blog-o-sphere

I'm an avid reader of blogs. My first hour at work is generally spent catching up on blogs and the news. I'm not a great commenter, because I generally don't want to comment for the sake of commenting and don't like to repeat what others have already said.  But I do read many blogs and I truly enjoy following along with other people's journeys.

Facebook's lovely "On This Day" feature showed me that it's been a year since I took Dee to the Halloween Hunt where my absolute favourite photo was taken. 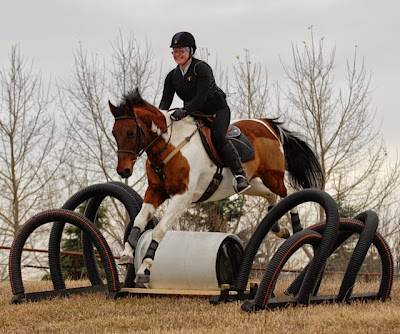 When I was looking at it I noticed that aside from the Holy Shit strap, every piece of tack on her has been replaced.  For this I blame the blog-o-sphere!

Amanda and Sprinklerbandit are two of the biggest tack whore enablers I follow.  I seriously enjoy their blogs and I love all the stuff they open my eyes to, but holy bejeezuz, I have taken my tack collecting to a whole new level because of things I've seen on their blogs.

My simple fancy stitch bridle with a french link has been replaced by a PS of Sweden High Jump and a loose-ring waterford.

The elastic breastplate has been gifted to the neighbour girl for her stash of newbie eventing tack (and in her first year she went on to be Reserve Champion, must have been the breastplate). I've now got a PS of Sweden High Five breastplate.

The Forestier monoflap just didn't fit Dee so it's been lent out to a friend and I purchased my lovely new-to-me Amerigo monoflap.

The Bow Balance irons have been replaced with MDC Ultimate Stirrups (purchased used for $20!)

The Mattes jump pad has been upgraded to an EcoGold secure saddle pad (purchased used at a tack sale).

The beautiful Ogilvy half pad has been relegated to dressage only as my Amerigo requires something a little more substantial. So I've got a no-name sheepskin half pad with double shims in the front.

The Woof boots have been relegated to back up boots and I now have Veredus Evento XC boots. (I actually had EcoGold XC boots in-between but they rubbed so they've been sold onto a new home.)

My vest, helmet and boots have all remained the same.  I love all 3 so I don't' really have any plans to replace them, except my helmet is going to expire soon. :(

And this is only for my jump tack.  Dressage is a whole 'nother subject.

I have no regrets!

Posted by LoveLaughRide at 08:19