I know I've been quiet on the blog lately. It's partially because I'm not riding as mush as I'd like.

The Boy and I have a rental property and the past two months have been spent dealing with tenant drama, finding new tenants, doing repairs (and a major bathroom renovation) and painting every wall in the house. We did the walk through with the new tenants last night so hopefully I won't have to spend 2-4 evenings a week there anymore.

The past weeks have brought some great highs, and some real lows.

Another clinic with Sandra Donnelly. Dee and I were in the 3'3"+ group and had a great time schooling 3'3"-3'6". The only moments of anxiety came from a bounce. They were the smallest fences in the last course at 3' while everything else was pushing 3'6" (including a triple and some angled oxers). Turns out I've never schooled a bounce at any height over 2'3". It was set up at the end of the course, it was the triple bar coming out of the corner, 4 (or 5) strides to the bounce.

I was very nervous but I managed to keep my shit together and while it was a little ugly the first time through, nobody died!

It was an awesome weekend and I left it feeling like Dee and I were ready to tackle Training.

After my ride on the first day of the clinic I was going to take off when my friend, K, noticed her mare was acting colicky. I decided to stick around to keep her company while she waited for the vet (her mare had colic surgery previously). While waiting we gave her a cold bath and a dose of Banamine as Calika was very dehydrated and was running a temp of 40.2°C. Vet drew blood, did a rectal and basically told us to check on her in a few hours as the Banamine had brought her temp down and she pooped.

Sunday her temp was back up so she got another dose of Banamine. We also put her in a stall to get her out of the sun (she lived in a small outdoor med pen as she was on stall rest for a hole in her check ligament). I checked on her at about 8pm (since I live super close and K doesn't). Calika hadn't ate, drank, or pooped. So the vet was called back out. I ended up hauling her to the clinic as the vet still had no idea why her temp was up as the blood results came back normal. 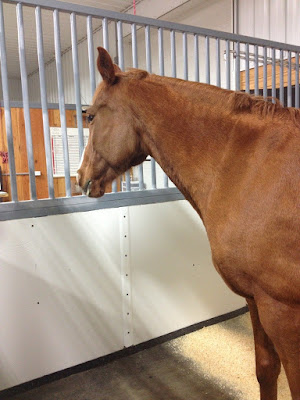 On Thursday Calika came home because she was doing much better, but still undiagnosed.

We went cross country schooling on Thursday as well. It started out really good. And then Dee stopped. I didn't have the greatest pace so we approached again and it was fine. I didn't make much out of it. 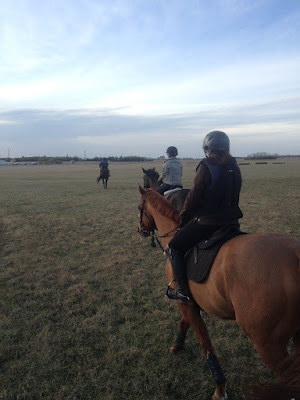 Then she stopped at the next fence. And stopped again, and ran out, and ran out. With come help from a horse made wing and a bigger crop we got over it.

And then she stopped at the next fence, 3 strides out. A reapproach got us over it. At this point I was very concerned. The only XC penalties we've ever picked up were at Alhambra when the footing was really bad and she slipped right in front of the jump. This horse does not stop at XC fences, no matter how terrible I'm riding.

I decided to finish up on the small coffin as we've schooled it a ton and the cabin in is no more than 2'9" with the out fence being 2'6". And she stopped at that as well.

I called it quits then. I don't know what happened, but Dee was telling me that she didn't want to play.

Lowest of the Lows

Friday morning K asked me to bring the trailer to the barn. Over night her mare had taken a turn for the worse. She was septic, and obviously suffering. It was time to let her go.

I hauled her back to the clinic and K and I stayed with her until the vets needed to do a necropsy (for insurance).

It was rough. Calika was K's first horse, her partner for over 12 years. Thankfully, she felt relief after, knowing she had made the right decision. I was ok until they cut off her tail, then I was decidedly not ok.

I'm grateful that I had the day off work and was able to help K through it. No one should have to do that by themselves.

High/Low All At Once

We had the XC course booked for Wed and I really needed to ride Ritchie so it was decided he'd have his first outing.

A friend of mine who lives a few hours away contacted me the nigh before asking if I wanted to do dinner as she'd be in the area for work. Since XC schooling is way more fun than dinner I invited her to join us and ride Dee.

Dee proved her Best Pony status by packing Michelle around. Michelle is a very talented and competent rider. Michelle was content to play Japanese tourist, until her phone died, and stick to the smaller stuff (but she's braver than anyone else I know, she went to Ireland and hunted sidesaddle!). Dee just jumped around like it was no big deal. It made me so happy to see her go, and to see her happy to do it. I've never seen someone else jump her.

Ritchie, on the other hand, was the worst he's ever been. He would refuse to go forward, running sideways instead. He'd rear and spin. His inexperience combined with the fact he hadn't been ridden in over a week made for a challenging ride.

But there were also some lovely moments. He trotted circles all by himself in the field. He jumped his first little bitty log. He stood like a rock when I went to dismount and forgot to detach my air vets until I was half way down. I hung off the side while madly scrambling for the clip and he didn't bat an eyelash.

I had to get off and lead him over every single jump (and the ditch). But after I lead him over it he walked/jumped over it like it was no big deal.

I didn't set him up to be super successful and it resulted in a horse who could.not.brain. 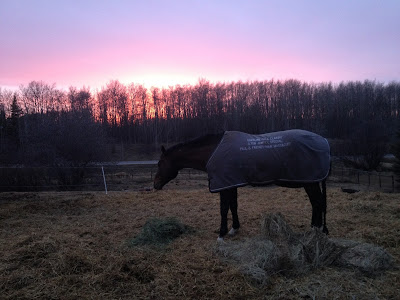 Overall, the last weeks have been a bit of a roller coaster. I've got Dee booked to see the vet next week so we can rule out a physical reason for her stopping. She is a 19 yo sport horse, I wouldn't be surprised if some of her joints need some help.

Posted by LoveLaughRide at 10:48