As I mentioned Dee and I played hooky from responsibility and attended a local schooling show on Sunday. The weather has been unseasonable warm so I even managed to bath the filthy creature on Saturday afternoon.

I had signed up for 2 rounds at 3' and one 3'3" round. I slept in, puttered around my house and then leisurely headed over to the barn to wash legs and load up. I arrived at the grounds (about 45 min away) at 11 and had plenty of time as they were just finishing up the 2'6".

We had a relaxed warm up outside before heading in to wait. And then they decided to drag the ring, so we waited some more. Then a quick warm up over the fences. We were able to school a vertical and then oxer-one-stride-vertical combination. The one stride really required an open step, so we put two in the first time through (no even a real chip, just two strides).

My entire game plan for the show was to just get successfully around the courses and to keep working on keeping the pace up, my hands level and being organized through the turns. When we stuck to this plan everything went really well. I really just wanted to get around a 3'3" course at a show before our upgrade to Training.

The first course had me starting out a little under pace, resulting in some interesting jumps. As we got rolling it got better. I put 6 in the 5-stride (on purpose) but nailed the 2 and the 1 strides. Best of all? The 3'0" jumps looked small, really small, and I wan't nervous at all.

We ended up taking first in this class. Our time was over 3 seconds faster than the second place pair (also eventers). People sometimes underestimate us because Dee is small and decidedly not-fancy but we are handy and quick (and both of us are ultra competitive). I made an offhand comment how the navy of the second place ribbons was way prettier. Apparently Karma was listening and decided to provide.
The second course was the Jr/Am and it was the class where I really felt like I rode the best. It wasn't perfect but it had a good rhythm, was organized and just felt good. Except, I got lost. I completely blanked on which was fence 5 so I ended up throwing in a circle before continuing on my merry way. No one ended up making it to the jump off so I ended up with a second.

I was getting a little nervous for the 3'3" but figured if the 3'0" looked small I could totally jump one extra iPhone without any issues. I schooled the one stride in the warm up just to prove to myself that we could do it.

The 3'3" Jr/Am class only had two of us and I went first. It turned out to be our least pretty round. I spent a good potion of the course asking for more canter and having Dee completely ignore me. I knew we were underpowered and a backwards but without a whip or spurs (this is why I normally always ride with a whip) there wasn't much I could do to convince Dee that I meant it. Despite our issues with pace we got around fine until the last fence. I really rode for the one stride and completely missed the boat on bringing Dee back after in time to organize around the corner to the last oxer. We were just too discombobulated to get over it. She stopped (in slow motion) and I pet her, told her she was a good girl, picked up my canter and re-approached. The second time turned out to be one of our nicest fences of the day.

The stop left us with a second (out of 2) but I was really happy with the whole day. Sure there were pilot errors, and I think Dee was tired, which was why she was resistant to move up (we had a private dressage lesson on Friday and a private jump lesson on Saturday). But we showed at 3'3"! I was nervous but not rendered helpless by anxiety, which is a big improvement over this time last year. 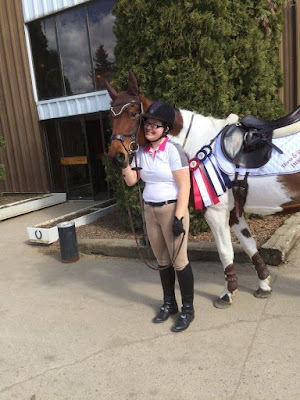 We proved that the height is totally within our range. We were able to get around safely and successfully even when it didn't go perfect. We have 8 more weeks before our Training debut so we've got time to iron out the kinks (and start riding with spurs and/or a whip again)

Thanks to Shimmer-E for the media and to Erin and Isabel for the moral support!

Posted by LoveLaughRide at 14:19