Seriously, Who Can Have Just One?

So just before the holidays, Britt likened horse to potato chips, asking if it possible to have just one?

For me that answer is apparently no. I've had 2 horses since Sullivan was born. I figured that one senior performance horse and one young horse was the perfect combination.

Then we bought the acreage and in order to bring Sullivan home (and keep Dee boarded at an indoor for the winter) I needed to find a companion horse. I initially had intended to borrow one of my mom's 3 (apparently equine collecting is genetic), but when Mom let me know that Chase was looking for a job after his family had grown up and moved on, I couldn't pass up bringing my old man home.

So that makes 3. One performance horse, one youngster and one senior babysitter who can pack The Boy around. Perfect, right?

Of course, just when you think something is perfect life will throw you a curveball. (This is the absolute best kind though. It's basically a rainbow, glitter covered curveball)

Not long after we moved into our new place conversations were had between me and one of my best friends about her young stallion, LaBamba SE (Ritchie). Ritchie was being leased by a local trainer and Shimmer-E's life is currently in flux. She just started a new job, has a young daughter, her husband is working out of town during the week and it looks like they will be moving sometime this summer (closer to me!!!). With the lease on Ritchie about to expire, it was decided that since I now had a place that could work for a stallion, I would take over the ride on him. 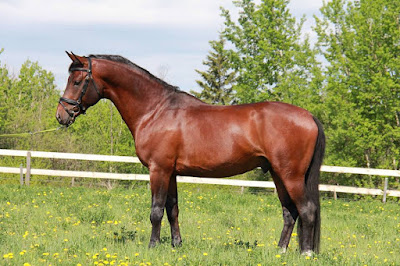 After figuring out some logistical difficulties (I only have one water trough, one round bale slow-feeder net and the stallion pen won't be built until the spring), Ritchie arrived last Sunday.

He's a 2010 16.1 RPSI Stallion, with the sweetest and most cuddly personality.

I've ridden Ritchie a handful of times before he went to his lease, taking him to his very first show when we was a late 3-year-old. I absolutely love this horse. He has the most incredible mind and work ethic. I loved him so much that I bought one of his first foals within hours of him hitting the ground. Yup, Ritchie is Sullivan's sire. Having them both on the property really showcases how much Sullivan looks like his Daddy. I have hope he will eventually outgrow this ugly stage!

Ritchie's life so far has been almost exclusively dressage. He's coming 6, has sucessfully shown First level and was starting to school Third at the end of his 4-year-old year. In the last year he hasn't been out and about at all, so that is one of my biggest priorities for him. He's well schooled, but still very green about life outside of his little sandbox.


In the past week he's hauled to the arena 6 times, has jumped x-rails twice and gone on his first trail ride with me (he's been on one or two walks down the road before). I'm really excited to see how he will take to jumping and eventing. Plus, it's really fun to ride a horse who doesn't struggle with dressage.

Posted by LoveLaughRide at 08:39