It was very strange to sleep in on a horse show day.  I got to the barn and loaded up the mare shortly before 10 and was on the grounds for 10:30.  I decided to braid at the trailer because she actually stands better at the trailer than she does at the barn.  Braiding went quick, that is until I got to her forelock and then it all fell apart.  She was not interested in me touching it, never mind braiding it.  In the end I could not get it braided with the time and lack of help.

Dressage was on grass so I tossed in little corks and headed off to warm up.  Our warmup was FABULOUS despite the fact that my coach was nowhere to be found!  She was forward but contained, supple and responsive.  We did a bunch of spiral in and out to loosen up her shoulders.  I was feeling pretty good so I headed over to find out how many riders before me.  The whipper in stated I was in now, and I needed to get moving.  I should have told her that I wanted to take a few minutes (since they were running early) but I was flustered and managed a single trot around the outside.  The mare has never seen a dressage ring and was confused why she wasn't supposed to jump it.  She was tense and very, very looky.  I remembered my test and managed to complete my goal of keeping her speed and stride under control, no running since 20X40 is small!

We ended up with a 58.5% for a 62.3.  Not what I was hoping for but fair.  Our scores were quite consistent.  A few 5's, a few 7's but mostly 6's.  We need to work on keeping that relaxation inside the little white fence but that will come with some miles (and if I remember to breathe).

I then settled her in with her hay bag and headed out to walk the course.  There were some questions that I anticipated being difficult but I felt all we doable.  I felt that fence placement was actually a bigger question than the actual fences. My coach and I devised a game plan and I felt confident we could deliver.

At this point the skies were starting to darken and I popped the mare into the trailer and took cover myself because it started to pour.  There was a ton of rain and hail over a 20 min period so Stadium got pushed back.  We watched the last of Pre-Entry go and then walked our stadium course.  It was full of turns and interesting fences.  Once again we came up with a game plan.  I was going to take big corners, focusing on inside leg to outside rein and be scarier than any fence out there.

It worked!  We didn't have a single run-out or refusal and we only pulled one rail.  Fence 1 was an oxer (seriously, this is 3 shows in a row we start with an oxer, it's like it was designed for me).  Mare tried to run out but I got after her and we stalled out a little bit and then deer jumped.  She didn't even look at any other fences.  We pulled a rail at fence 8 because I sort of forgot to prepare for the turn and she got flat to the jump.

Needless to say I was ecstatic after exiting so it was high fives all around.  My coach told me it was the nicest stadium round she has ever seen me ride! 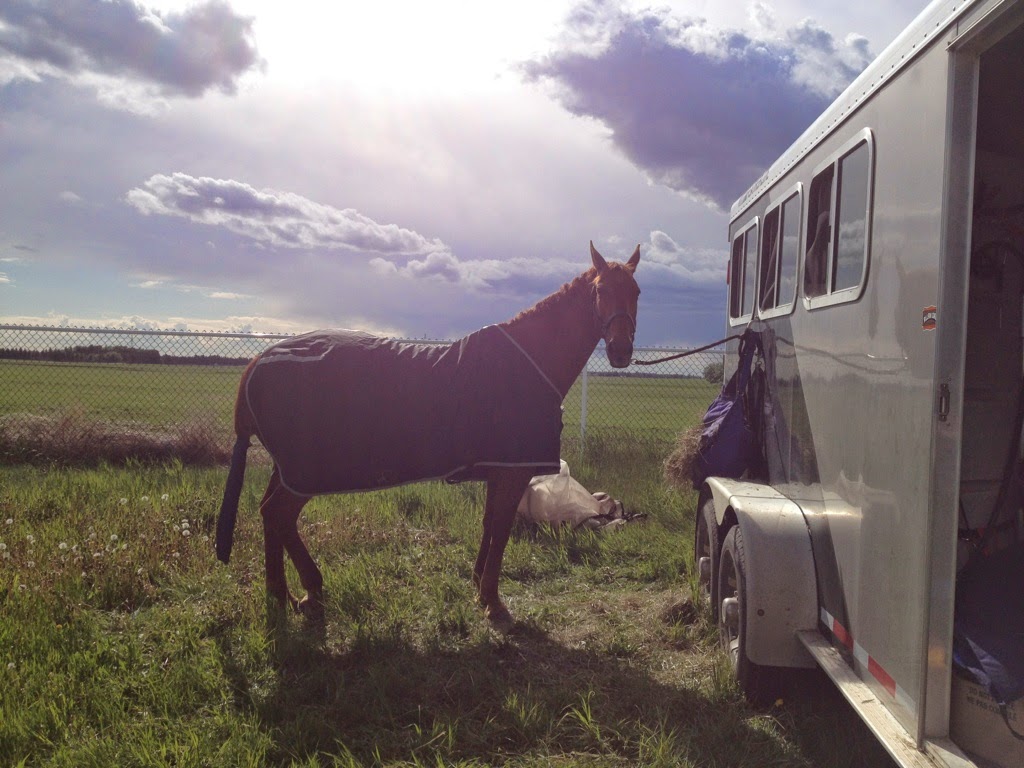 After that I was super happy to load up, drop the pony off and return for the competitor supper (lazy perogies!!!).

It was a good start to the mare's first event.
Posted by LoveLaughRide at 10:25