Chase went back to the vet on Friday for follow up x-rays. The x-rays were more for peace of mind than anything. He has actually been home from his stall rest vacation for two weeks now, and has been much sounder. Since it wasn't an emergency I waited until my Friday off to haul him in rather than take time off work. 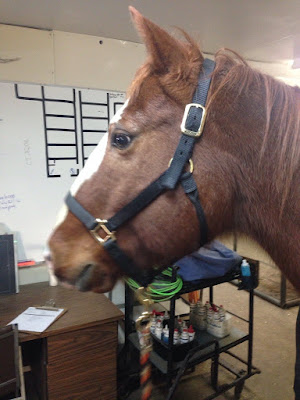 With how good he's been feeling and moving I was sure we were going to be keeping him around, no matter what the pictures showed. 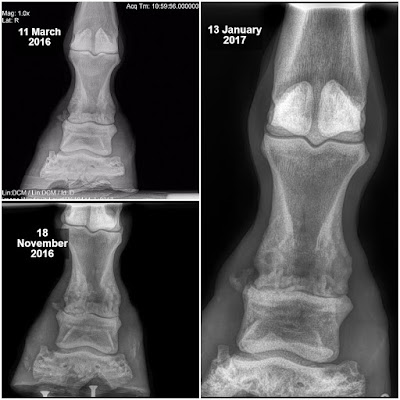 One side of the joint is completely fused, and the other is almost there. The vet said there wasn't much point in putting him back in the brace and stall rest as long as he's not a total lunatic in the pasture. Essentially as the fused side lays down more bone growth and gets stronger it will keep the motion minimized and the other side will continue to fuse.
Basically, this is a better outcome than the vet expected. We are supposed to just let him be a pasture pet for another 12 weeks and then we can start riding him if we want. He's still an older, arthritic horse, so in all likelihood his riding will be contained to carting beginners on trail rides, but that's totally ok because he will still be with us. Harassing us for all the cookies, keeping the rest of the herd in line and being his generally annoying puppy-dog self.

Posted by LoveLaughRide at 11:33