Dee's hocks were injected in May. After the injections I noticed that the stopping problem we had picked up improved, but that was the only difference. Every other experience I've had with joint injections has resulted in a dramatic difference.

After XC at Buster Creek she was really insistent that I not lift her hind legs too high while removing her corks. I started noticing that after work she's not quite right about her back end. She's also been struggling extra hard with roundness and relaxation and occasionally take some NQR steps in the back (no one else notices, but I sure do).

I booked her another appointment at the vet to coincide with Chase's next set of alcohol injections (which, once he's done the full set will get a post of their own because holy-moly, what an improvement).

Her hocks are solid so the vet moved up. And now her SI joint is presenting as sore, as is her lower back.

After an extensive discussion we ultimately decided to shockwave her back and SI area. The other option was SI injections but we decided to go the less invasive route.

Dee was a rockstar for the shockwave and then the vet and her tech geeked out and put K-Tape on her, with instructions to leave it on as long as it stuck (or take it off on Sunday before my show, which ever came first). 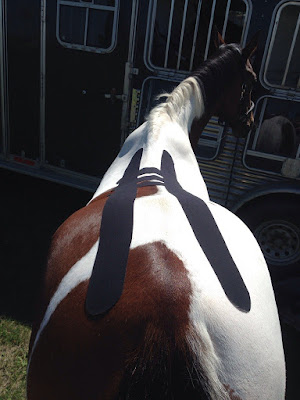 This was 2 weeks ago and they told me I would see an improvement with 72 hours.

Unfortunately, Dee is still sore in her back and there's been no change really. After a bunch of research and conversations I've decided that SI injections are my line in the sand. I'm not going to take that step at this time.

Instead, I  have decided to try giving her some time off jumping to see if there is any improvement.

So our eventing season is over (I've got one more recap though) and I'm ok with it. I'm hoping to bring her back into full work to go to the Gorsline jumper show where we won so much money last year, but time will see.

I adore this horse. She's done so much for me in the two years I've had her and she owes me nothing. 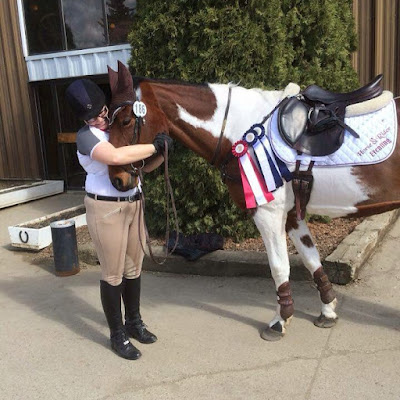 If her body can't handle the stress of jumping and eventing at this level then we will move onto Plan B but for now I'm crossing my fingers.

Posted by LoveLaughRide at 11:49