Alberta is pretty awesome. We don't have rats. No really, we don't. I never appreciated this fact until I lived in Ireland and the rats were the same size as my cat.

Another fact I've been pretty grateful for, especially as Lyme disease comes more to the forefront of the news, is the lack of ticks.

I'm not claiming Alberta doesn't have ticks, we do, but they are not very prevalent, especially in the Prairies. As you move north into the forest and west into the mountains you are more likely to encounter ticks.

Because of this I've managed to go nearly 30 years without ever personal experience with a tick. When I pulled Dee's blanket the other day I had to go get someone else to confirm that the black spot I found was in fact a tick. With some help (and the handy travel size tweezers in my purse) I managed to successfully remove the creepy little thing. 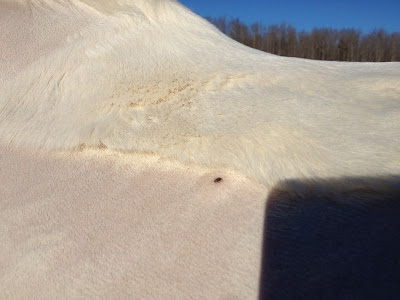 I'm not overly bothered by bugs. But something about a creature with it's head buried under the skin and still being able to see it's legs wiggle gives me the heebie-jeebies. Ugh. Just typing that made me vaguely uncomfortable.

Alberta has a Submit-A-Tick program in an effort to track and asses the risk of Lyme disease. (Most Alberta doctors refuse to admit we have Lyme in the province and as such it is nearly impossible for sufferers to get treatment, but that is a completely different story). I dropped off the tick and within a week they called to let me know it was a Winter Tick, likely transferred from a moose, and not a carrier of Lyme disease.

I still have no idea how Dee managed to pick it up and have it appear under her blanket in the span of 16 hours.

Here's to hoping I don't have any more tick encounters. Apparently I can never move. Sandra was telling us horror stories of her time in Virginia where they had to remove ticks from legs every single day. Just no. Ick.
Posted by LoveLaughRide at 08:00