This weekend saw Dee return to competition. Since we have just been cleared to start jumping it was not an event or even a jumper show.  Nope, we attended our first endurance ride with my friend Julie and her daughter Laurel. Since I've never done this before (and neither had Julie), Dee is returning from an injury, and it was located in the Devon river valley (extremely hilly) I decided that we should just do the fun ride rather than the 25 mile. The fun ride was only one 12 mile loop.

I love eventing, but if I ever get to the point where I no longer feel the passion or desire to continue I will transition to endurance. That's how much fun it was!

The ride was incredibly well organized and everyone was incredibly friendly and helpful. The organizers had appointed one person as the liaison for the 12 milers. She was awesome, she walked us through the whole process and was always around to answer questions.

We registered and then vetted in. The vet actually commented on how nice it was to have one of the fun ride horses stand still. We vetted in with all A's and got a very enthusiastic "good luck" from the vet.


We decided to head out with the first group since Julie's horse doesn't handle standing around and waiting very well. We stuck to the back of the pack and held back after the first mile. All 3 horses were raring to go but manageable.


About halfway through the ride someone rode right up Laurel's butt (we never heard them call out, we would have stopped and waited for them to pass), spooking her young pony. Her pony bolted into Julie's horse, who bolted into Dee. Thankfully Dee is Best Pony and she basically ignored them.  They both were getting there horses under control while the pair who caused the incident just kept trucking along past us. Irritating but manageable.

Shortly after this we caught up with another pair of 12 milers right before Suicide Hill (it's steep, but not nearly as bad as the name makes it sound). We waited until they were half way down the hill before we started down. Their lead horse kept stopping and refusing to go, so we ended up asking to pass. Apparently they thought it would be a great idea to use us as a lead down the hill and promptly put their horse's nose into Laurel's pony's tail. Poor pony had had enough of that nonsense and kicked. Thankfully she did not connect when she kicked but we got a lecture about red ribbons at the bottom of the trail. In an effort to be polite we just smiled and nodded.

They passed us again and we shortly arrived at a very long, steep hill. Once again we waited until they had a head start before starting up.  Once again their horse kept quitting part of the way up so we caught up to them around one of the bends. In a seriously irritating move they then told us that our horses were puffing way too hard and we should take a break.  There was absolutely no where to stop safely and comfortably until you were at the top. Our horses were puffing, but not to an extent I was worried. Hills are not something we have around our place so we don't get to do much hill work. So once again, I just smiled and nodded. 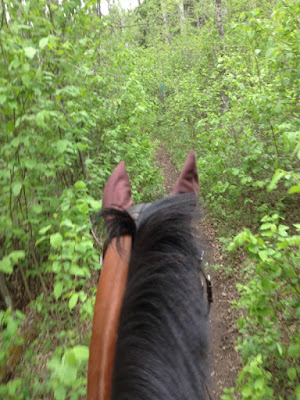 We took a short break for the horses to catch their breaths at the top of the hill and then continued on. We caught up to the pair again, passed them and thankfully didn't see them again.

The rest of the ride passed without incident and all 3 horses pulsed down quickly. We ended up completing in just over 2 hours. We vetted out with all A's again, thanked the volunteers, scarfed down some delicious cookies that were provided and were on our way home.

Despite a few small irritants it was possibly one of the funnest rides in a long time. On the way out and on the way in we passed a bunch of longer distance riders and every single one wished us luck or asked us how it went. I'd go back in a heartbeat.  And do the 25 mile.

*Does anyone have any suggestions on how to get the grease crayon number off Dee's butt? She's had a bath, been groomed and nothing is making a difference*

Posted by LoveLaughRide at 08:33